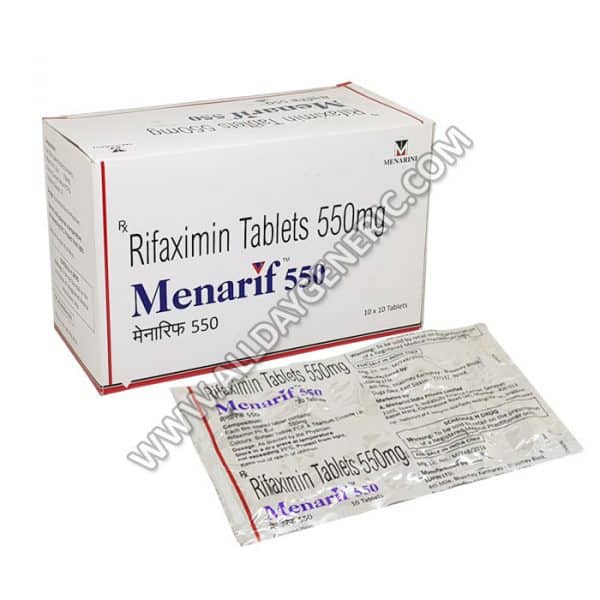 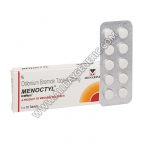 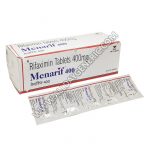 Rifaximin Tablet is an effective drug used to treat bacterial infections of the intestine. Rifaximin 550mg comprises Rifaximin – a semisynthetic antibiotic is used orally in the treatment of traveler’s diarrhea, irritable bowel syndrome with diarrhea caused due to certain specific strains of bacteria.

What is it prescribed for?

This medicine is used for the prevention of episodes of hepatic encephalopathy- a brain disorder identified by changes in thinking, behavior, and personality caused by presence of toxic elements in the brain due to failure of the liver to clear them out of the body.

Rifaximin 550mg is also used for the treatment of diarrhea associated with Irritable bowel syndrome .

Take Rifaximin 550mg in the dose and duration as prescribed by your physician. It comes as a tablet to take by mouth. Swallow it as a whole. Do not chew, crush, or break it. Menarif Tablet 550 mg may be taken with or without food, but it is better to take it at a fixed time.

Side Effects of Rifaximin 550mg

Before using this medicine, tell your doctor your medical records.

Rifaximin may cause live bacterial vaccines not to work as well. Do not have any immunizations/vaccinations while using this medicine unless your doctor tells you to.

During pregnancy, this medicine should be used only when required. Discuss the risks and benefits with your doctor.

It is unknown if this drug passes into breast milk. Consult your doctor before breast-feeding.

Rifaximin 550mg does not usually affect your ability to drive.

Menarif 550 mg is probably safe to use in patients with kidney disease.

Rifaximin mg should be used with caution in patients with severe liver disease. Dose adjustment of Menarif Tablet 550 mg may be needed. Please consult your doctor.

Communicate with your doctor quickly if an overdose with this medicine is suspected. Symptoms of an overdose may include fainting, difficulty in breathing, dizziness, headache, nausea, and vomiting.

Rifaximin is an antibiotic that fights bacterial infection only in the intestines. Rifaximin 550mg works differently from other antibiotics because it passes through your stomach and into your intestines without being absorbed into your bloodstream.

No. There is currently no therapeutically similar version of Xifaxan available in the United States.