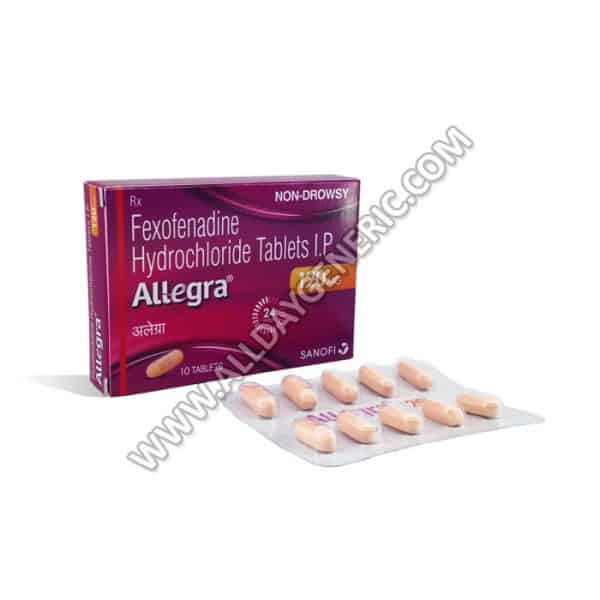 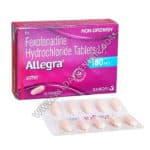 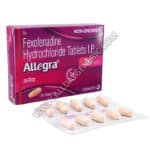 Fexofenadine 120 mg is used to relieve the symptoms of seasonal allergic rhinitis (hay fever) such as sneezing, itchy, runny or blocked nose and itchy, red and watery eyes.

Fexofenadine 120 mg belongs to a class of medications called antihistamines. It prevents the release of histamine, a substance that plays a major role in many allergic reactions by dilating blood vessels which makes the vessel walls abnormally

Fexofenadine 120 mg is an antihistamine. This drug reduces the effects of natural chemical histamines from the body. Fexofenadine relieves the symptoms of seasonal and year around allergies like hay fever in adults and children.  Fexofenadine has a quality of fast onset of action, as it attain its therapeutic efficacy in one hour. It aids in relieving the symptoms of allergic reactions like urticaria, itchy red skin, burning sensation and swelling. Fexofenadine is a drug given in the allergic conditions such as sneezing, itchy nose and throat, watery, red and itchy eyes, runny nose that arises in the following conditions such as:

It contains Fexofenadine 120 mg as an active ingredient in it. The drug targets the histamine chemical that generates undesirable allergic symptoms. The mast cells release histamine and gets attached to other cells having receptors of histamine. This attachment makes the cell activated and releases other chemicals that accumulate to produce allergy symptoms such as runny nose and throat irritation. Fexofenadine blocks the H1 receptor of histamine and prevents the activation of cells releasing histamine.

You should not take Fexofenadine 120 mg if you:

How much to take Fexofenadine 120 mg?

The drug dosage should be according to the prescription of the doctor that he does after assessing your condition and various factors such as age, gender and body weight. The dose varies from patient to patient.

The dose can be increased or decreased depending upon the patient’s condition. Always take the dose as prescribed by the Doctor.

What are the strengths available?

Fexofenadine 120 mg is available in three strength combination on our website:

Who is the manufacturer?

Allegra is manufactured by Aventis Pharma, a pharmaceutical giant and is available on our website in the packs of 120, 60 and 90 tablets.

Fexofenadine 120 mg should be taken exactly as prescribed by your doctor.  Swallow the tablet with full glass of water. Don’t crush or chew the tablet. Avoid taking any other type of liquid like fruit juice as they may decrease the absorption of the drug.

Always take the medicine as instructed by the Doctor or Pharmacist. Don’t consume the medicine in a greater amount.  Never change the amount of the drug without the advice of the doctor. 120 mg dose is generally recommended to be taken twice a day and 180 mg is taken once a day. The intake of dosage varies from patient to patient. So, doctor will recommend the best therapeutic dose for you.

For how long should it be taken?

Take the medicine as long as recommended by the Doctor. Always ask the doctor before stopping the intake of the drug as the sudden stoppage of the drug without the doctor’s recommendations may cause unknown effects on the patient’s body. Hence dose completion is necessary.

What if you take too much (overdose)?

If overdose, immediately consult with your concerned doctor. Take medical help as soon as possible if you encounter below stated symptoms:

What if you miss the dose?

Take this drug on routine basis and try to take the medicine at the same time each day. This reduces the chances of missing dose. Talk to your Doctor if you miss the Dose. Don’t double up the dose in order to catch up with the previous one.

Every medicine has some side effects, same way this drug also have some undesired effects with it. Fexofenadine 120 mg shows common side effects such as:

Are there any possible drug interactions?

Always inform your doctor about the drugs you are taking till date. Give a complete list of prescription or non-prescription drugs and any other disease conditions. This way, doctor is able to decide and give you the list of drugs and other things that may interact with Fexofenadine 120 mg. Drugs listed below may interact with Fexofenadine and can increase its sedation effect:

What are the things to be taken care of?

• Don’t take fruit juices and antacids as they hinders the absorption of Fexofenadine 120 mg
• Don’t share your medicine with anybody, even if they have the same symptoms
• Avoid the intake of alcohol beverages while using Fexofenadine as it can enhance the effect of drowsiness
• Always store the medicine at the room temperature and away from moisture, heat and light
• Consult with your pharmacist about the proper disposal of the drug
• Keep a complete record of all the medicines you are taking along with this medicine

• Do not take Fexofenadine 120 mg with any fruit juices (such as apple, orange, or grapefruit).
• Take the disintegrating tablet on an empty stomach, at least 1 hour before or 2 hours after a meal.
• Avoid using antacids within 15 minutes before or after taking this medicine. It can make it harder for your body to absorb this medication.
• Leave about 2 hours between the time that you take fexofenadine and your indigestion remedy.
• There may be other drugs that can affect fexofenadine. This includes prescription, over-the-counter, vitamin, and herbal products. Tell your doctor about all medications you use.
• Talk to your doctor or pharmacist before taking fexofenadine: if you have problems with your liver or kidneys, if you have or ever had heart disease, since this kind of medicine may lead to a fast or irregular heartbeat, if you are elderly.

Q. Is fexofenadine a decongestant/ sedating/ stimulant/ anticholinergic/ gluten free?
Fexofenadine 120 mg (also available as Allegra) is not a a decongestant. It may produce minimal sedation and may have mild stimulating effects. It does not have anticholinergic activity. Fexofenadine and other related brands are gluten free. Please refer to package insert of the prescribed brand before use.
Q. Is fexofenadine safe/ during pregnancy and for breastfeeding?
Fexofenadine 120 mg should not be used during pregnancy unless clearly necessary and it is not recommended during breastfeeding. Patients should follow the advice of the doctor regarding its use.
Q. Is allegra better than zyrtec?
Both Zyrtec (cetrizine) and Allegra (fexofenadine) are antihistamines. Zyrtec is effective at    combating hives, while Allegra is most often used to treat the symptoms of hay fever. Both  medications work well, but their effect may vary upon individual response. Always consult your  doctor regarding its use.
Q. Is allegra available over the counter?
Yes, it is available over-counter.